skip to main | skip to sidebar

Replacing the Zipper in a Carhartt Jacket 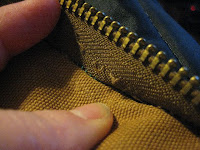 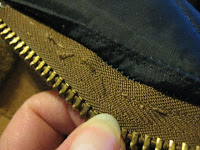 Speaking of time consuming projects, I have another one today! I need to replace the zipper in a Carhartt jacket that is pretty new. That means it is really stiff. The zipper is also a #10 brass zipper, which means its teeth like to bite my fingers as I try to rip it out! The jacket has been put together like Fort Knox, so getting the zipper out has been a real fight. If you ever buy one of these jackets and wonder about the price, you at least will know it has been extremely well made.

I ripped out the double row of top stitching, thinking this would release the zipper. I had to practically rip one stitch at a time and the thread is the same as the gold thread on a pair of jeans. I pick ALL of these threads out for the project to look its best. After literally hours of work, the zipper is still in there, sandwiched between the quilting and the outer fabric.
The final step, then, is to cut the zipper out, carefully cutting along the seam that joins the outer fabric and the lining. A couple of these pictures may illustrate this. 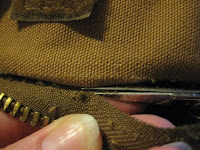 Usually on a jacket zipper, once the old one is out, there are two steps to putting the new one in. The first is to sew the zipper to the inner wind flap and/or lining. The second is to sew it to the outer fabric. Since the two layers are still attached to each other, I need to put the zipper between them and sew it all at once. This is not a sure thing, because that quilting fabric likes to sneak under the feed dogs and get caught. So, here goes, I'll be back tomorrow to let you know how it goes. 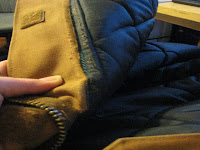 One of a Kinds

Promote Your Page Too